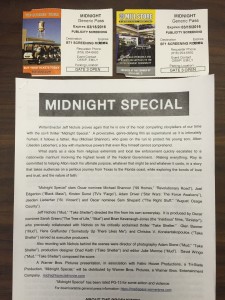 Kati and Steve had a chance to hang out at Warner Brothers studios and see a special screening of the new sci-fi film Midnight Special. At the center of the plot is Alton Meyer – an 8 year-old boy with bright eyes and aversion to sunlight. He’s a hot item in a race-to-beat the clock between a strange religious cult, frustrated government officials and his tormented parents.

Alton has some very cool abilities like showing people amazing things, tapping into top secret government info and single-handedly pulling down a satellite.

People from the cult want Alton returned to The Ranch for their own judgment day; the government sees him as a threat while his parents are determined to get him to a certain set of coordinates on a particular day for a reason neither Alton nor parents know.

Check out the trailer.