Young people of our time are facing incredible challenges. Very little is being given to our youth in our schools, churches or in any other place. They are facing a quest for meaning and a struggle for identity.

Far too many young people are turning to drugs; any substance that alters the user’s ability to function. Alcohol – the number one drug of choice – to cope with and escape the challenges as well as the pain of life. Teen alcohol use kills about 4,700 people each year — more than all other illegal drugs combined.*

Approximately two-thirds of the world’s production of illegal drugs is consumed in the United States. Each year Americans spend more then $65 billion on illegal drugs. ** Drug abuse is a serious problem. Costs to society are substantial and the consequences are of drug use are not limited to the individuals who take drugs. Even non-users are at risk; drug use costs our society over $180 billion per year. Drug production harms the global environment, methamphetamine production uses toxic chemicals which seep into the ground and contaminate water sources. The Amazon region is being depleted by coca production. Drugged drivers injure and kill innocent people every year. Terrorist activities are connected to drugs; many organizations raise money for their violent attacks through drug production and trafficking. Children are adversely affected by drugs their parents use or manufacture in their homes.***

It’s taking its toll on youth. Addiction is a pediatric disease. We’re losing our kids with new drugs we’ve never heard of or seen before. Ones that have been around for years have become stronger. For example, in less than 10 years the potency of marijuana has tripled.

Today’s teens are in a very different environment – with pressures, technology and priorities – vastly different from previous generations.

Drugs are everywhere. Kids have them readily available at school and at the mall. They hear about them in their music, in movies and see them in the lives of celebrities. In the past year alone we’ve lost a number of stars due to overdoses including Cory Monteith, the star of “Glee” and most recently Academy award-winning actor and director Philip Seymour Hoffman.

Thousands of teens die each year from drug and alcohol abuse while many more become addicted. Its valedictorians, athletes, musicians and every other social or religious group you can think of that are smoking up, shooting up and drinking up. Our kids are doing whatever they can to get high using everything from marijuana to drinking hand sanitizer to their parents’ prescription drugs.

Teenagers take drugs because they want to change something about their lives. Research provides a variety of reasons including:

The effects are many ranging from hangovers to chronic fatigue to low self-esteem to inability to concentrate to suicidal tendencies.

Drugs of Abuse
A drug is a pleasure producing chemical and can be misused and become addictive. Eighty percent of addicts have serious risk factors. There are many illegal substances being abused today as well as over-the-counter medications, household products and legitimate medicines that are also being abused. Drugs are like music to the brain and can have different outcomes. The higher you go the more interested you become and the more being “sober” is boring. It’s a case of “dysphonic” vs. “euphoric.” These drugs of abuse being used by teens can be divided into seven categories; each one having different properties and effects on the user.

Narcotics
Heroin, morphine and OxyContin are narcotics used to dull the senses and relive pain. They can be made from the opium poppy or created in a lab.

Stimulants
Often referred to as “uppers,” they reverse the effects of fatigue on the body and brain. Cocaine, amphetamines, methamphetamines and Ritalin are all stimulant drugs. Cocaine is derived from the coca plant that grows in South America. Nicotine is found in tobacco and is also used as a stimulant.

Depressants
Substances such as tranquilizers, sedatives, hypnotics, anti-anxiety medications and alcohol are depressants.

Cannabis
Marijuana (weed) and hashish are referred to as cannabis. THC (delta-9-tetrahydrocanabinol is the ingredient that makes the user feel “high.” More people are now driving under the influence of weed than alcohol.

Hallucinogens
Substances that alter the perceptions and moods like LSD, Ecstasy, PCP and Ketamine are manufactured in labs. Some of the non-manufactured ones include peyote and mescaline.

Inhalants
These can be common items like lighter fluid, glue, paint products, gasoline, cleaning fluids and propellants found in aerosol cans contain chemicals that produce intoxicating side effects similar to alcohol. These products are deliberately sniffed or inhaled to get “high.”

Steroids
Anabolic “roids” are any drug or hormonal chemical/pharmacological substance related to Testosterone that promotes muscle growth. Some steroids are used for legitimate medical reasons but many are illegally manufactured and distributed.

Trendy Highs
Teens are looking for a “high” today wherever and however they can get it. Sometimes it’s about availability and accessibility. Here are a few examples of some of the more trendy things being used:
• DABs or butane hash oil, a mix of cannabinoids extracted from a marijuana plant and blasted with butane, is smoked. A         single dab of the oil can contain up to 90 percent THC, compared to strong strains of marijuana that contain an average         of 25 percent.
• “Spice” refers to a wide variety of herbal mixtures that produce experiences similar to marijuana (weed) and are         marketed as “safe,” legal alternatives to that drug. Sold under many names, including K2, fake weed, Yucatan Fire,         Skunk, Moon Rocks, and others — and labeled “not for human consumption” — these products contain dried, shredded         plant material and chemical additives that are responsible for their psychoactive (mind-altering) effects.
• Energy drinks like Red Bull, Monster and Rockstar make you a “wide-a-wake drunk.” Energy drinks are a stimulant         because they’re loaded caffeine while alcohol is a depressant. Too many energy drinks will give you a high as well as         cause your heart to race at dangerous levels.
• Hand sanitizer has replaced drinking cough syrup. Since hand sanitizer is 120% proof alcohol drinking one small bottle         is like drinking three shots.
• Soaking Gummy bears candy in vodka. These “Boozy Bears” have no odor and can be innocently consumed in the         classroom or elsewhere.
• Consuming “Whipped Lightning” – alcohol infused whipped cream.
• Inhaling alcohol has become popular because it’s a quicker high. When you drink your liver breaks it down, so when you         have too much you pass out or vomit. Inhaling bypasses the liver and goes straight to the brain. Some put alcohol in dry         ice to inhale. Guys are also consuming using a bong like an enema while girls are using alcohol soaked tampons.
• “Pharm Parties” are trendy. Kids “trial mix” different prescription drugs from the host’s medicine cabinet. Xanax         (Alprazolam) is the drug of choice. The danger is that kids don’t know what they’re taking and mixing.
• Designer drugs are being sold as bath salts. These kinds of designer drugs do not show up in urine samples.

Paraphernalia
In a brief report like this it’s difficult to list everything that teens are utilizing to produce, conceal and use illicit drugs. It’s amazing how creative they’ve become with ordinary things. Scales that look like iPhones and tiny plastic sandwich bags to carry drugs. Pipes to “smoke up” with are being hidden in batteries and hairbrushes. Plastic or metal “snuff bullets.” Lip balm laced with narcotics. Close attention must also be given to some current fashions. There’s an endless supply of beer, booze and drugs shirts, Tees, hoodies, hats and accessories online. For example there’s a line of Tees with 4:20 printed in various forms. The numbers “4:20” are synonymous with smoking weed. Obviously, just because a teen wears one of these Tees doesn’t necessarily mean they’re getting high. But at the very least it should be a cause for concern.

What can we do?
Kids are trying to handle the challenges of life and find some kind of meaning and purpose. But they’re looking in all the wrong places and using all the wrong things. We must empower them to make better choices by thinking long-term about the consequences. There needs to be enhanced education about the perils of substance abuse (including alcohol) as well as rehab for those who “slip through the cracks.” It’s a mental, emotional, physical and spiritual conflict.

What can you practically do to make a difference in the epidemic of substance abuse?
• Connect with, engage and influence teens in your own family. Help equip them to handle the challenges of life using values-based solutions. They need to find their identity in the person God designed them to be. Parents and grandparents can play a huge role in curbing this problem.
• Make yourself available to meet with youth in local churches, schools and community organizations. Kids today need to know that someone cares.
• Be an encourager. Let them know that they matter. A smile, a few encouraging words really can make a difference ion the life of a young person struggling to put the pieces of life together and how to connect the dots. Do this in your family as well as those you encounter in your neighborhood or in a store.

Tonight we are live on Instagram with @DrJosh at 8pm PT/11pm ET. Join us for a conversation about #mentalhealth in challenging times.
View on Twitter
2
2

Has this "new normal" affected your mental health? You are not alone. Join us live on Instagram on Wednesday Sept. 16 2020 at 8pm PT/ 11pm ET with special guest @DrJosh. https://t.co/EztZ4hiiKv
View on Twitter 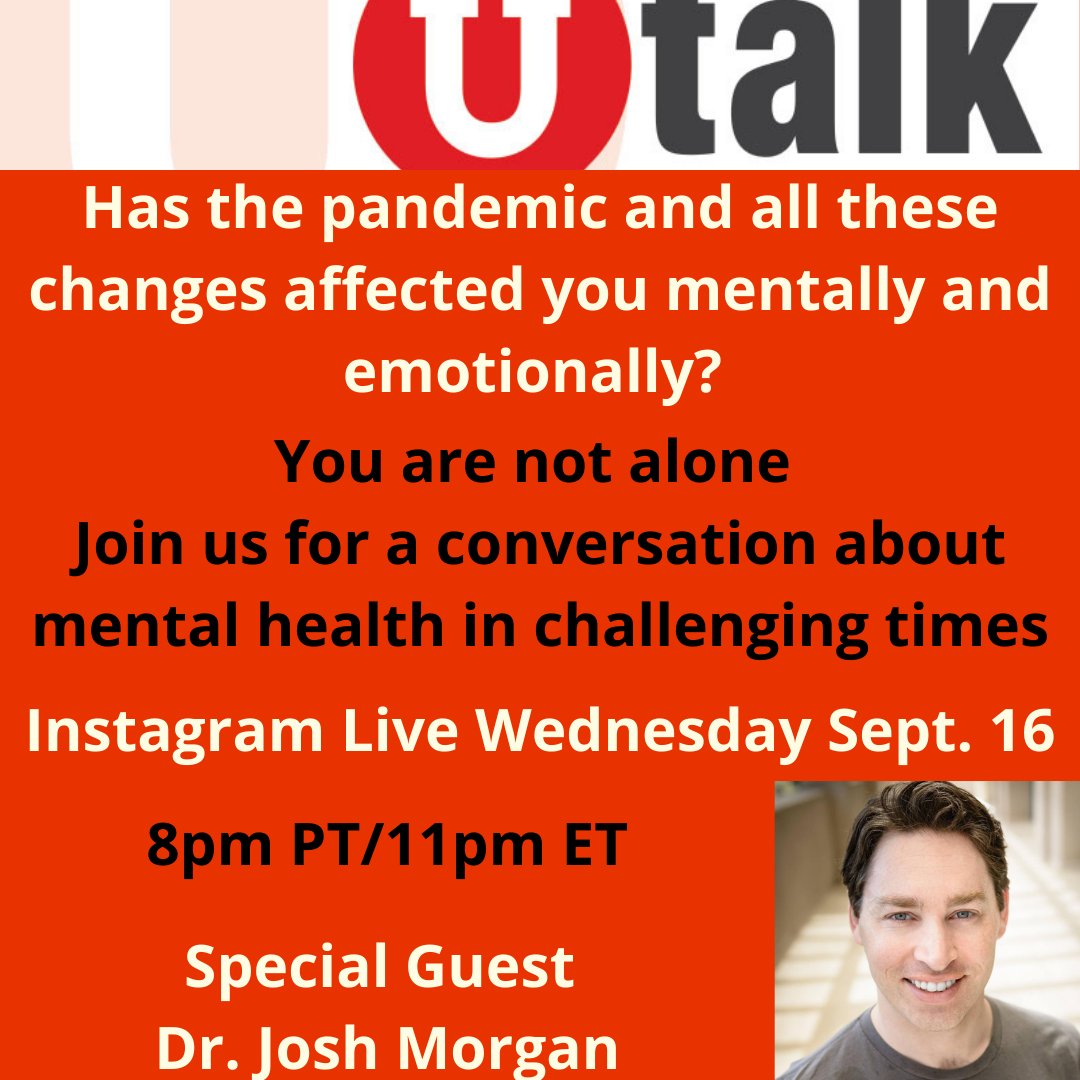 This Wednesday September 16 we are back on Instagram live at 8pm PT/ 11pm ET. Join us for a conversation about #mentalhealth in challenging times with special guest @DrJosh https://t.co/OhdLzcda98
View on Twitter 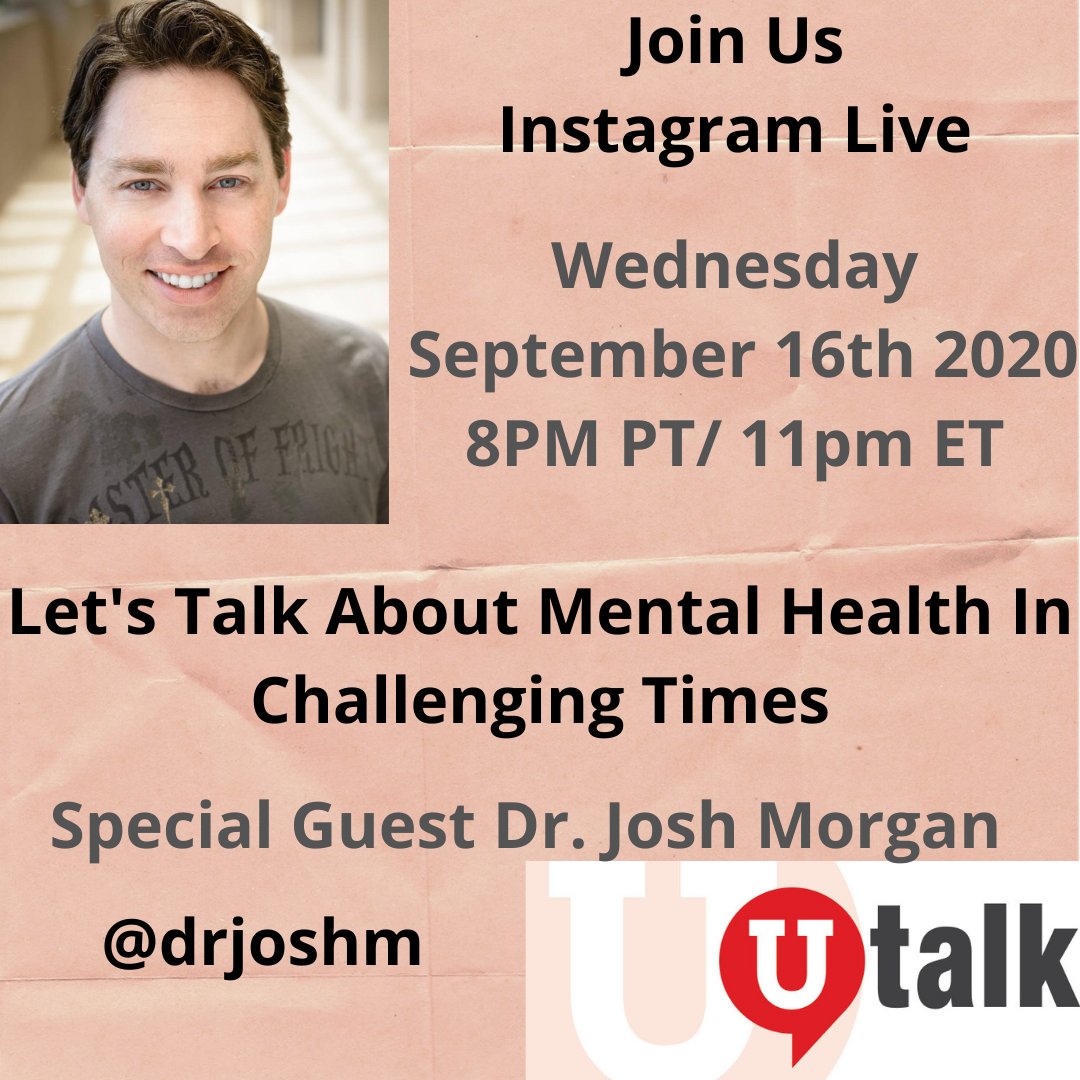